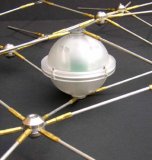 Cranston, RI—A new ‘living system’ sculpture was recently installed in the University City/Big Bend Metro Station in St. Louis, MO. Entitled, “Linear Accelerator,” and created by artist Brower Hatcher and his Mid-Ocean Studio, the sculpture consists of two, 50-foot by 30-inch tapered tubular forms suspended beneath the arches of the station platform. Lit by LEDs in over 800 clear PC orbs molded by Fielding Manufacturing, the sculpture is equipped with interactive capabilities, and responds to the movement of pedestrians and trains in the station with pulsing patterns and changing colors. 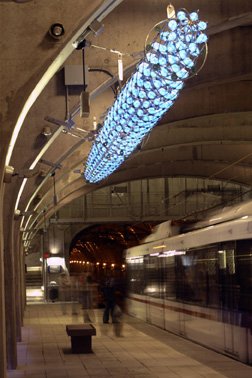 Described as a breakthrough in architectural lighting technology, “Linear Accelerator” is one of a series of ‘living systems’ envisioned by the artist and his Mid-Ocean Studio intended to explore the possibilities new technologies present in designing distinctly personal spaces. Mid-Ocean Studio is a group of artists, designers, fabricators, and technical personnel working under the direction of Brower Hatcher. The team, which has created over 30 large-scale public artworks nationally, works closely with resource collaborators that include computer scientists, mathematicians and engineers, to develop a 3-dimensional matrix-based public art that is “highly conceptual, intimate and mythic.”

Fashioned in a 3D matrix pattern of stainless steel rod, the structure itself acts as a circuit, eliminating the need for wiring to power the 5VDC LED lighting system. At the vertices of this structure are a series of clear polycarbonate orbs, each containing a circuit board with two OSRAM produced LEDs per side, a computer chip and wireless antenna. This allows each LED in the matrix to be controlled from a remote computer. In the St. Louis structure, video cameras positioned in the station provide a signal for shape sensing software, which, in turn, controls the response patterns in the lights. According to Hatcher, however, the structure could respond to virtually any input signal: “movement, sound, vibration, light. It's quite infinite,” he said. “We're really just beginning to experiment with the concept.”

The original design concept for the “Linear Accelerator” sculpture called for the orbs to be made of glass, but consultation with molder Steve Fielding of Fielding Manufacturing convinced Hatcher's team that an injection molded orb of optically clear polycarbonate would be a better choice, despite the required investment in tooling. “Steve persuaded us that PC would be as reliable as glass and less fragile,” Hatcher said. “It also appeared glass would be a lot more expensive and complicated to fabricate.”

But Fielding did more than win the team over to the virtues of plastic. While they knew how they wanted the orb to look and how they wanted it to function, Hatcher said, “We really didn't know much about the molding process and what was involved. Steve was very helpful.”

“They came in with a sketch and some CAD drawings,” said Steve Fielding, “and we were able to help them work through an injection-moldable design. And when they explained what they needed the part to do and what it was interfacing with, we were also able to add additional value and help streamline their process.”

While the orb part is “not that complex,” according to Fielding, it did require good cosmetics for clarity and optical reflectance, and tight tolerances. The final design emerged as a hermaphroditic housing with an interlocking seal and notched flanges to support the board in plane with the parting line. A ribbing system was added to increase stability, and provision made for the addition of O-rings and a sealing gasket. Threaded inserts were added by Fielding during the molding cycle to improve strength, and cut an assembly step for the Mid-Ocean team.

The parts were molded in a two-cavity, hardened steel mold Fielding was able to provide at a discounted price, and because this was an artistic endeavor, the company also passed along additional discounts on the inserts. “The only thing that made injection molding feasible for this project was that they indicated more orb sets could be used on additional projects,” Fielding said. “Otherwise, volumes would have been too low.”

Indeed, other public art and architectural lighting projects are planned for the orbs and for Mid-Ocean Studio's investigation of the ‘living systems’ concept. One upcoming project is for a museum in Tempe, AZ, which Hatcher said, is “an organic canopy-type structure” in which handmade glass will mix with 30 LED-filled orbs in each of five forms. As for the effects to be displayed on this piece, “each LED is full-spectrum so it can generate a range of colors and intensities,” said Hatcher. “In addition, each board has its own code, so it can be signaled individually. The boards also have something like nine channels, so apparently we can do almost anything with them. One of our next steps will be to get them to signal each other so that one could initiate a signal and it would propagate throughout the structure.”

Mid-Ocean is also securing patents and investigating the commercial potential of the ‘living systems’ concept. They soon hope to market an Illuminated Matrix System™ product line to architects and designers. In the meantime, rail commuters in University City Station, St. Louis, MO, will no doubt be wondering just what is happening to the lights.

Founded in 1962, Fielding Manufacturing specializes in the manufacture of high precision miniature die-cast and injection molded components. The company provides a full-service solution that begins with design for manufacturability, rapid prototyping, tool design and reliable parts production, and extends through a complete range of secondary operations and finishing. Fielding Manufacturing has a strong reputation for quality, service and dependability, and offers a wealth of experience in a wide range of industrial markets, including telecommunications, fiber optics, hardware, electronics/electrical, automotive, fasteners/threaded components, appliance, and consumer.

To be added to the electronic distribution list, please e-mail laurenr@trankin.com

Fielding pushes the envelope on efficiency and precision in miniature parts production. Our integrated systems approach drives quality up and cost down.

For a quick quote on your part, send a sketch, print or solid model to
Request Info/Quote. Or just give us a call.